“One night in Havana”

“One night in Havana” 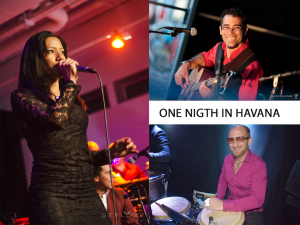 Yemi Valdes will bring cubanía to life with an evening of expressive music, mixing traditional bolero with jazz, son, cha cha cha, rumba rhythms and more for a lively and fun evening of entertainment.

Yemi Valdes
The voice of the charismatic and talented Cuban singer and composer Yemi Valdes has a beautiful timbre that is wonderful to listen to. Yemi grew up in a musical family and began singing at an early age. She has performed and toured with several bands in Europe, including the Puerto Rican-American salsa singer Tito Nieves and the Brazilian singer, songwriter and record producer Marcos Valle.
Yemi has various projects such as “YemiSon”, “Yemi Valdes & Latin Dk” and Yemi Valdes Quartet (Jazz), which debuted at the Copenhagen Jazz Festival 2017.
Yemi Valde’s debut album “Mirame” was released in the spring of 2021.

Peter Ehler
As a young man,studied at the Escuela Nacional de Artes in Havana, where he specialized in Afro-Cuban music. He was a student of “Changuito” from “Los Van Van”.
Has been involved in many different projects, including Grupo Danson and Alexander Abreu, Calle Real, Cordero y los Gran daneses. Peter’s versatility allows him to be actively involved
in various genres including jazz, Latin American music, flamenco & pop.