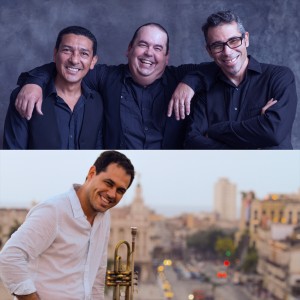 Strong, popular quartet on the Danish Latin jazz scene!
Four amazing Latin American musicians put each other together in a delicious, warm acoustic sound with languorous vocals, guitar, trumpet, bass and percussion. We proudly lift the legacy of our predecessors and dive deep into the melodic, beautiful and catchy repertoire with the best of Cuba and South America: Sensual Boleros, beautiful Son Montuno and charming Cha-cha-cha from Cuba and Puerto Rico, lively Joropo and Merengue from Venezuela, Bossa Nova from Brazil, Vallenato from Colombia, Tango from Argentina and Corrido and Huapango from Mexico. Sing along to classics like “Besame mucho”, “Quizas, quizas, quizas”and dance Latin-close to inciting rhythms .We can be the completely discreet background music for a romantic evening, and start the dance party, as desired!

Ernesto Manuitt Hernández (Vocal, Cuatro & Percussion)
Born in Habana, Cuba, in 1969, the son of a Cuban mother and a Venezuelan father. Grew up in Venezuela, where he got to know the Venezuelan folk music tradition and became a virtuoso on the cuatro, he moved back to Cuba at the age of 18, where he was quickly captured by the thriving music scene in Habana. Before long, he was discovered by Mirtha Medina, Cuba’s uncrowned cabaret queen, who fell head over heels for his boyish charm and huge, scenic charisma. He was later recorded as lead singer in Giraldo Pilot’s Orchestra Klimax, as with a fantastic stage show combined with conspicuous themes in a short time gained unimaginable popularity and world fame, and with whom he toured intensively around the world up through the 1990s. Since 2002 he has lived in Denmark, from where he continues his career, now as founder and lead singer of the charanga orchestra CUBITA, as well as being a dynamic frontman in orchestras such as CocoSon (DK), Grupo Danson (DK), Picason (Switzerland), Orquesta Gali (Switzerland), and Alex Wilson project (UK), and popular guest with DR’s Big Band.

Elvio Bravo (Vocal & Guitar)
Born and raised in Colombia and has, as an obvious natural talent, played music and sang since he was 5 years old. As a 19-year-old, he was the first guitarist to win the national Colombian competition in the genre “Trio”. In Denmark, Elvio has been a member of one of Denmark’s leading salsa orchestras “SalsaNa´Ma” for 15 years, both as a singer and composer. In addition, he regularly performs as a soloist with i.a. University of Southern Denmark Symphony Orchestra and conductor Saul Zaks, and in various constellations in jazz, tango, Spanish folk music and other Latin American genres.

Yasser Morejón Pino (Bass & Guitar)
Born in Habana, Cuba, June 6, 1976. Graduated from the Conservatorio A.G. Caturla in 1990, and from the Conservatorio Amadeo Roldan in 1996, with guitar as the main instrument. Shortly before completing his education, he became interested in the bass, both the electric and the double bass, which he received instruction from Carlos del Puerto Jr. As a bassist, he became a member of many different groups, as among others Aries Gerardo Alfonso, Denis y su Swing, (CD), Natura, Roberto Fonseca y Temperamento, Chucho Valdes Jr., Polito Ibañez (CD), Rojitas y su Orquesta. In 2000 he came to Copenhagen, where he now works as a highly esteemed bassist in groups such as The End 2.0, Simon Spang-Hansen Quartet, his own Latin jazz project The Latin Syndicate, Blanco y Negro and Grupo Dansón . In 2006, he completed his education with NHØP in the Rhythmic Conservatory in Copenhagen, as a bass player and music teacher.

Mayquel Gonzalez Gonzalez
Young and talented Cuban trumpeter. He began his musical studies at the age of 10. He has played with the best in Cuba and with many international stars, with numerous accolades reported in his performances.
Enter the I.S.A. in 2001. In 2002 he won first prize at Jojazz in the older category. Ernán López-Nussa invites you to join HABANA REPORT. Among other subsequent actions have been his participation in the PROYECTO CARAVANA, the collaboration with the singer Augusto Enrique and his BIG BAND and the already well-known one with Mejora. At this stage he has worked in Geneva, Italy, Colombia, Canada, the United States, Norway, Denmark and Great Britain. In 2006 he joined the group of the pianist Harold Lopez-Nussa Quartet and in 2008 he returned to Irakere. In 2009, he performed a season of concerts accompanying the Colombian Yuri Buenaventura. In 2008, he made his debut as a musician in the entertainment world in the premiere in Cuba of the dance-musical ¨VIDA¨ by the ¨Ballet Lizt Alfonso¨ Company and in presentations in Martinique (2010 ), Qatar (2011) Germany (2011).
In parallel, he maintains a classical repertoire as a solo instrumentalist, performing with different orchestras throughout the island as well as recordings related to the genre.
Other artists and projects with which he has collaborated; Arango Brothers, Teté García Caturla, David Torrens, Wiliam Vivanco, Cuba Libre, Rómulo Castro (Panama), Carlos Varela. Joao Donato (Brazil), The Academy, Alexis Bosh, Carlos Masa, Alejandro Vargas, Germán Velazco. Big Band of Joaquín Betancourt, Ivet Cepeda and Iván del Prado.