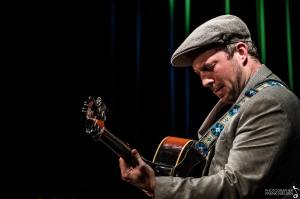 Irish man Richard Farrell, immersed himself in the music world from a young age. Starting off classically, being trained in Ireland’s best cathedral choir (St Patricks) from the age of 8 and then following his own musical path since the age of 12. He sings, plays guitar and piano. He has released 4 albums in the last 10 years, one solo album (Richard Farrell and The Last Tribe) and 3 other collaborations (History of Harry, Kammerpop and a recent one from Trainman Blues). He is troubadour by nature, picking up sounds and melodies by ear, transcribing his world into songs and lyrics. Blues is his foundation, with elements of folk and soul too. Richard is a singer foremost, an avid songwriter. He has played on the Copenhagen scene for nearly 3 years now and has just released a debut album with Trainman Blues in March of this year.
Check out