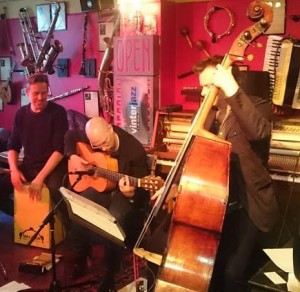 Flamenco / Woldfusion / Crossover
Compositions where warmth, energy and temperament of the South meet with evocative melodic melancholy of the North
FLAMENCOPASSION has played in most of Denmark since 2000 – concerts, matinees, cultural events and as exclusive dinner music.
Has i.a. played at Malmö Guitar Festival 2004 in Musikhuset Jeriko and at the 1st international flamenco festival Ankara 2007, Womex Globenhagen Showcase, Winter Jazz and at Copenhagen Jazz Festival since 2012 and has had various guest musicians with such as. Mikkel Nordsø, Bjarke Falgren and Mathias Heise.
In 2003, the first CD “Flamenco Passion” was released on Cope Records.
“Poul Jacek Knudsen and his fellow musicians, Nicolai Land: bass, and Anders Pedersen: percussion, are all technically proficient and the compositions are stylistically extremely well proportioned.” (World music magazine “Djembe”)
“The title says almost everything. It is the Spanish folklore that is the center of this well-playing trio, which with a nice acoustic sound and a good portion of self-composed songs breathes new life and energy into this genre.” (“The Musician”)
“Flamenco Passion creates a sublime atmosphere in the house with their southern rhythms.” (From “Café High Q”‘s website)
The CD FLAMENCOPASSION2 with Bjarke Falgren on violin, was released in October 2010 on Exlibris Musik / Storyville.
“In my ears, Flamenco Passion is one of the best fusions of flamenco and jazz, although many have tried this over the years.” (Rolf Nielsén in the Swedish music magazine “Lira”)
“The four extremely capable musicians deliver on the CD distinguished interplay and great virtuosity. The quartet participated in this year’s GLOBENHAGEN showcase in connection with the WOMEX festival, and showed here that the material to a large extent also works live.”
FLAMENCO PASSION2 was nominated for a Danish Music Award for Danish worldtrack of the year in 2011 and was the CD of the month in January 2011 on DMF / kbh’s website.