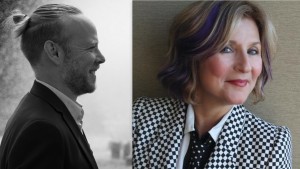 JANIS SIEGEL
Over the past four and a half decades, the voice of Janis Siegel, a nine-time Grammy winner and a seventeen-time Grammy nominee, has been an undeniable force in The Manhattan Transfer’s diverse musical catalog. Alongside her career as a founding member of this musical institution, Siegel has also sustained a solo career that has spawned more than a half dozen finely-crafted solo albums and numerous collaborative projects, amassed a large international fan base, and garnered consistently high critical praise.
Over the years, Janis’ unmistakable voice has become one of The Manhattan Transfer’s most recognizable trademarks. She sang lead on some of the Transfer’s biggest hits, such as “Operator,” “Chanson D’Amour,” “Twilight Zone,” “Birdland,” “The Boy from N.Y.C.,” “Spice of Life,” ”Ray’s Rockhouse,” “The Shaker Song,” and “Mystery,” and co-wrote and sang lead on the Grammy-winning “Sassy.” She also gained a reputation as a vocal arranger by writing five of the charts for the group’s acclaimed masterwork, Vocalese, and seven charts for the group’s Grammy-winning album Brasil and winning a Grammy herself in 1980 for her arrangement of “Birdland.” These days, you can find Janis in the place she loves most, the studio, producing various ventures for other artists and singing on a wide array of projects, touring with her trio, teaching at universities and high schools, and paying tribute to her idol Ella Fitzgerald with a new show called “ELLA – A Life in Song.”
Her tenth solo CD, released on Palmetto Records, is called NightSongs, and her two most recent solo collaborations are Honey & Air, a Brazilian/jazz vocal adventure with her group Requinte Trio, along with percussionist/singer Nanny Assis and pianist John di Martino, and Some Other Time, a tribute to Leonard Bernstein with trombonist/singer Nils Landgren with arrangements by Vince Mendoza.
https://www.singers.com/performers/Janis-Siegel/
MATTIAS NILSSON (b. 1980), has with more than two thousand concerts in 33 countries around the world established himself as one of Sweden’s most personal pianists with his very own voice. Nilsson incorporates the Nordic Vemod, with influences from classical, folk and jazz music. Through his improvisations and a very warm and personal approach, this becomes a unique expression and a musical landscape with completely new shades of color. It’s not for no reason they call him the Swede with the warm Scandinavian touch.
“Mattias Nilsson rightfully fits into the genre of the great ‘Nordic’ pianists, that is to say those extraordinary musicians who have managed to produce original music characterized by the encounter between the jazz tradition and the particular humus of Northern Europe…” – A PROPOSITO DI JAZZ (Italy)
“’Dreams Of Belonging’ is part of a continuum in which the improvisation of jazz and the freedom of interpretation are applied to different musical starting points. The more romantic side of classical music, folk music and direct nods to the core of traditional jazz expression…” – JAZZ POSSU (Finland)