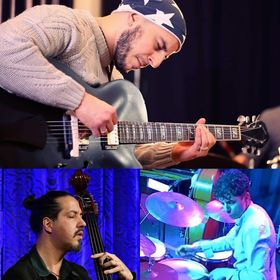 Claudio Quartarone is considered one of the greatest italian guitarist of his generation.
Born in Catania, September eight 1984, he shows an inclination for music from an early
age, in fact he began studying classical guitar at the age of eight. As a child he won many
classical guitar competitions, also making debut as a solo performer, his talent was so
clear that he was considered an enfant prodige in the classical guitar environment.
The press on Claudio Quartarone is numerous and unanimously defined as an
extraordinary talent, it is also mentioned in the most important sites of Italian jazz culture,
newspapers and magazines: JAZZIT, JazzEspresso, All About Jazz, JazzItalia, Guitar
Club Magazine, Neuguitars.

entré i koncertområdet 100 kr. per person